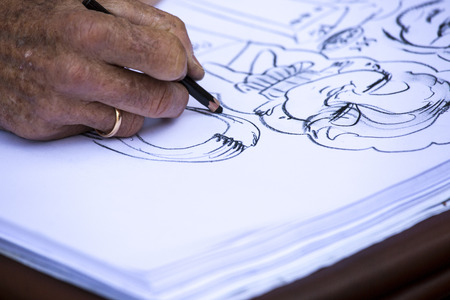 David Levine was once called “the greatest caricaturist of the last half of the 20th Century” by Jules Feiffer, a Pulitzer Prize-winning editorial cartoonist and author who is in the Comic Book Hall of Fame.

But David Levine did more than just draw for The New York Review of Books. If you were to examine his life’s work, you’d discover thousands of caricatures as well as hundreds of oil and watercolor paintings.

Levine’s schooling included the Tyler School of Art in Philadelphia, just a few short hours away from his childhood home of Brooklyn, NY, where he studied at the Brooklyn Museum of Art, among other places.

Trained by his parents to question authority and root for the underdog, Levine’s artwork often examined human flaws and foibles in an insightful way.

As a famous caricaturist, his work appeared in many famous magazines including Esquire, The Nation, Newsweek, The New Yorker, Playboy, and Time. Well known in print, his work also ended up in permanent museum collections and portrait galleries in major cities like New York, Cleveland, and Washington, D.C.

He drew many famous people over the course of his long career. Perhaps one that stood out was his take on Lyndon Johnson from 1966. He drew the president staring straight ahead, with his shirt open, pointing to an operation scar on his body. That scar was a map of Vietnam. About that piece, and others like it, he said, “Anytime I can bring a god down to human scale, so people can say, ‘Gee, Johnson has big ears just like my kid,’ I’m delighted.”

If you’d like to see some of Levine’s artistic work, there are several published books showcasing his art including 1969’s Pens and Needles and 1978’s The Arts of David Levine. To see his book of caricatures of U.S. presidents drawn over five decades, look for the book American Presidents published in 2008, a year before he died at the age of 83.