At Mark Hall Caricature Art, we have a deep appreciation for other caricature artists, especially those who helped create the industry and develop the art form into the modern age. Caricature artists have worked for many years to create unique drawings and artworks, drawing a wide range of people from everyday citizens to world leaders to Hollywood stars.

Let’s look at some of the most notable caricature artists from the 20th century as listed by Art Encyclopedia who helped pave the way for those of us that practice the art form today. 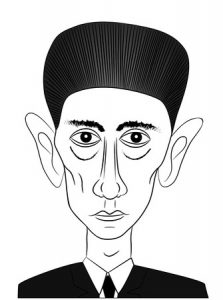 Best remembered for black-and-white drawings of celebrities and show-business stars, Hirschfeld was one of the few artists commissioned to provide art for U.S. postal stamps. His work can be found in museums around the country today, including the Metropolitan Museum of Art and the Museum of Modern Art, both in New York City.

MAD Magazine has been known for its great caricatures, and no one did them better than Drucker. During his length career, Drucker has also contributed images to Time magazine and Newsweek, and he has been the recipient of numerous awards from the National Cartoonist Society.

A British caricaturist, Steadman is perhaps best known for his political and social illustrations, including those done for prolific author and “gonzo journalist” Hunter S. Thompson. He also was named Illustrator of the Year in 1979 by the American Institute of Graphic Arts.

Known for his pen-and-ink caricatures of famous writers and politicians, Levine’s work has appeared in numerous publications. He’s had work appear in Time magazine and The New York Times, as well as Playboy and The New York Review of Books.

A man of many talents, Duclaud was a Mexican painter, caricaturist and illustrator most famous for his caricatures of celebrities. His illustrations appeared in The New Yorker and Vanity Fair magazines, and his illustrative styles is said to have inspired others to follow their talents in caricature art, including the above-listed Hirschfeld.

While all of these artists were well-renowned for their talent and ingenuity, at Mark Hall Caricature Art, I know that sometimes the best caricature is the one of you. That’s why I put special care and thought into every drawing. Make any event a greater success and give every attendee a keepsake they will cherish forever by booking Mark Hall Caricature Art. To learn more about scheduling caricature art at your upcoming party, wedding or other event, call me today at 720-312-1220.