You’ve heard of the word caricature, but do you know where the word comes from? It’s actually of Italian origin– the words carico and caricare mean “to load” and/or “to exaggerate.” Back in the 1590s, a pair of brothers, Annibale and Agostino Carracci, first applied those words to their exaggerated portrait sketches. 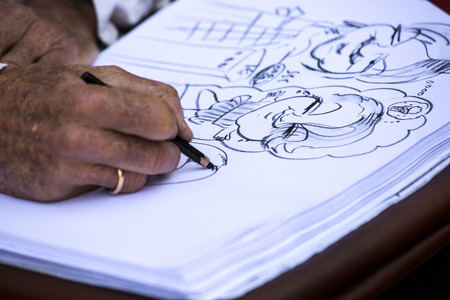 The Movement of Caricature Art

At the time, most artists wanted to create the most perfect natural representational art. In today’s terms, we’d say, “It’s ‘so real’ or ‘like a postcard,’” to describe perfect natural representational art. Caricature, on the other hand, went against the norm. It was a subversive artistic theory using humor to mock “the norm.” Today, colleges can include people who go against the norm, and back then, students at Bologna Academy in Italy were learning about caricature art. It was “radical” to do caricatures, which made it catch on with people. Indeed, caricature art became a distinctly Italian artform during the 1600s, with a couple Northern European artists riding the wave and doing some exaggerated human portraits, too.

Who was the first successful caricature artist? That honor goes to Pier Leone Ghezzi. He made a living producing caricature drawings of tourists visiting Italy in the 1600s and 1700s.

Eventually, satirical caricature art spread to places like England, France and America. For a while, artists started transforming people into other things, such as fruits, vegetables or animals. Just like with any form of art, it changes a little bit over time but also stays true to its roots.

During the 1820s, a magazine named “Punch” came on the scene in England. It was a satirical magazine using caricature illustrations to help sell more copies. Interestingly, Punch magazine is credited with using the word “cartoon” to essentially replace “caricature” as a descriptor during the mid-1800s. Because railways rose to prominence, magazines received wider distribution. Caricature artists (or “cartoonists”) became well known for their work, especially when they drew politicians, military leaders and other prominent people.

Besides magazines, newspapers became ubiquitous, especially in the early 1900s. Millions of people were regularly seeing caricature art on the pages of their local newspaper. Magazines also regularly included caricature art/illustrations, sometimes even on their covers.

Today, caricature art is done by a wide variety of artists, including Mark Hall in the Denver area. It’s popular at parties, where people enjoy taking a couple minutes to be drawn– and then having their exaggerated portrait to take home and hang up on their fridge or framed on the wall of their living room.