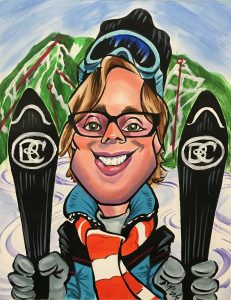 Consider the dictionary definitions… The word caricature can be used as a noun or verb. As a noun, it’s defined as a picture, description or imitation of a person in which certain striking characteristics are exaggerated ( larger or smaller) in order to create a comic effect. As a verb, to caricature is to make or give a comically or exaggerated representation of someone or something. The word portraiture is defined as a graphic and detailed description, especially of a person. Therefore, the difference comes down to keywords like “comic,” and “exaggeration”.

The Hyperbole of Caricatures

When someone’s caricature is drawn they’re likely to have features that are bigger or smaller than they are in real life… for instance, if you get your caricature drawn at a party, you might notice the artist gave you a more dignified noes … or maybe your chin is made smaller, or your eyebrows are extra bushy. All created for dramatic effect.

The Purpose of Caricatures

So what’s the purpose of caricature? It’s a way to Enhance the basic essence of a person creating an interesting version of them with a touch of humor. This brings friends and family together for a happy engaging experience. Caricatures are best when complimentary. They’re often used in politics and/or to entertain people. If you were to pick up a MAD magazine from years ago, you’d notice how many movie stars and celebrities got the caricature treatment– for your entertainment, and, perhaps, to make you chuckle.

Satire and Humor in Caricatures

A caricature artist is often interested in satire and humor. He or she uses the pencil, pen, marker, digital pen, or computer mouse to come up with a rendering of someone that’s just a little “out there” in order to make others smile or laugh. With caricature art, there’s an intentional distortion of the subject, as opposed to drawing someone’s portrait, which doesn’t involve distortion or exaggeration.

People in public places are often drawn to caricature artists to watch them work. They want to see how other people’s caricatures will ultimately turn out. It’s fun to see an artist at work, who then decides, moment by moment, what to distort and/or exaggerate about a person.

Mark Hall Caricature Art can be hired for your upcoming party or event to provide fun caricatures of people. Just call 720-312-1220 to discuss options today.